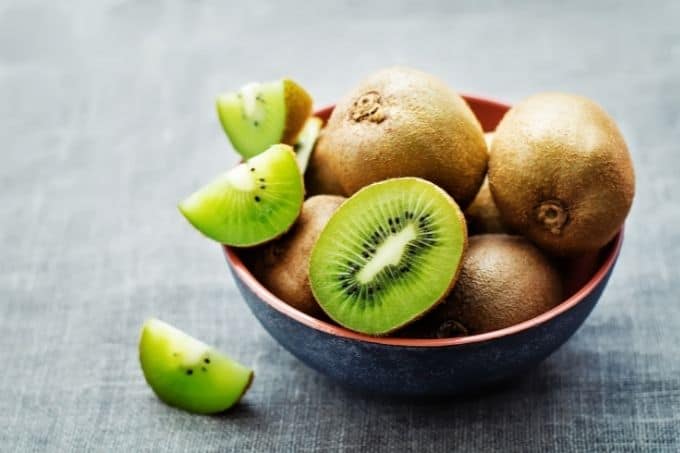 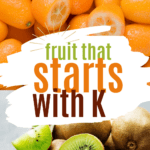 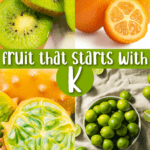 Are you looking for some fruit that starts with k? There are a lot of them, and some may surprise you! The most popular ones are probably the Kiwi, which is also called kiwifruit (the Chinese gooseberry). It’s delicious in juice or eaten whole. Other good ones include the Kumquat, Key Limes (yum!), Kaki Fruit, Kinnow, and several others. I hope this information helps you find the fruit that you’re looking for!

Delicious Fruit that Starts with K

Kiwi is a fuzzy brownish-green fruit from China with a tart flavor. Kiwis are an excellent source of vitamin C and potassium, as well as fiber. They have about half the calories of an apple, making them perfect for weight loss programs or anyone who wants to cut back on their calorie intake without compromising on taste.

Long before kumquat entered the mainstream of American cuisine, it was a popular ingredient in Asian dishes. With few calories and no fat, kumquats make an excellent addition to your diet – even the skin is sweet and edible! Just pop them into your mouth, and enjoy!

Kumquats are generally eaten fresh, either whole or sliced. They’re also commonly used in a variety of prepared foods, such as marmalades and preserves.

Kumquats are an excellent source of vitamin C and antioxidants, while also providing a healthy dose of dietary fiber.

Learn more about the health benefits of kumquats.

Kaki fruit is a popular variety of persimmon, which has been used for over 2,000 years to make traditional Asian desserts. Kaki fruits are usually eaten out-of-hand or sliced and eaten with yogurt dip. They’re also commonly used in prepared foods, jams, compotes, and smoothies.

Kaki fruit is a great source of fiber, Vitamins A and C, potassium, and more.

Key limes are smaller and more tart than other varieties of lime. They are commonly used in candy, baked goods, marinades, and beverages.

Limes are known for their great nutritional properties. They provide lots of good things, such as magnesium and potassium. These nutrients promote heart health in a big way. Key limes also provide a healthy dose of vitamin C, which can help promote good immune system function.

This Australian fruit is a super nutritious fruit with 50 time more vitamin C than an orange. The plum-like fruit is an excellent source of copper, is rich in iron, and is a great source of fiber.

The Kakadu plum is also known as the Bush Plum, and it’s native to the northern region of Australia. It’s a seasonal fruit that blooms between August and October each year.

It is said to have a somewhat bland taste with a sour finish and is used in smoothies, baked goods, and other recipes, though you can eat it on its own as well.

Kiwano melons have a firm texture similar to that of cucumbers, and a flavor that has been described as similar to a mixture of cucumber with a hint of banana. They are commonly used in salads or to make juice or smoothies.

Kiwano melons are high in vitamin C, and also contain a good amount of dietary fiber.

They’re also known as the blowfish fruit, and as you can see, that’s an accurate name!

The king apple is given to a couple of varieties of apple: the King David Apple and the Tompkins King Apple.

The King David Apple (discovered in 1893) is small to medium with waxy green or yellow skin with red to orange striping.

The Tompkins King Apple has been around since before 1804 and is a large apple with similar coloring to the King David.

Apples are high in vitamins A, C and fiber, which can help with digestion.

Kinnow fruit is a mandarin hybrid that has a sweet flavor and a crisp texture. It’s cultivated in Pakistan, India, and many other countries in Asia. Kinnow fruit is commonly eaten out-of-hand or it can be used to make juice or prepared foods like jams and jellies.

The kinnows are an excellent source of vitamin C, and they also provide a good amount of dietary fiber.

Called the “King of Citrus fruit” by some, originated in Vietnam. It has a sweet flavor and a soft texture when ripe – perfect for eating out-of-hand or in fruit salads. Its texture is more like a mandarin or tangerine than an orange.

The king mandarin orange, like most citrus fruits, is a good source of vitamin C.

The Kyoho grape originates in Japan and is popular in East Asia, where it is used to make wine. The grapes have large seeds and high natural sugar content. Kyoho grapes are used in making jelly and have a balanced sweet-sour taste.

The Kyoho grape is also known as the King of Grapes, for being both large and sweet.

They are high in vitamin C, which reduces inflammation and boosts the immune system.

Kabosu are a citrus fruit that grow in Japan, though they originated in China. These sour-tasting fruits often get mistaken for limes, but they’re actually more closely related to oranges and have their own unique flavor profile.

Japanese citrus fruit kabosu can be eaten as a snack or juiced. The juice is often used in cooking to reduce fishy flavors.

Kei fruit is also known as Umqokolo. Despite the name, these are plum-like fruits with a texture similar to an apricot. They’re native to Africa and grow along the eastern side of the continent. The fruit has a sweet flavor and soft texture. It can be added to salads, made into jellies or jams, or used in baking or beverages.

Kepel fruit is also known as the kepel apple, and it’s native to Indonesia. The flavor is said to be similar to a mango with a hint of cinnamon. It has also been described as having undertones of papaya, mango, and coconut or other tropical fruits.

Korlan fruit is also known as wild lychee. It’s native to Southeast Asia and is related to rambutan. The fruit juice is said to be a combination of sweet and sour tones.

The kundang fruit is also known as the plum mango. It is native to Southeast Asia. It has a purple seed inside which is edible but said to be bitter. The flesh of the fruit has the texture of a plum but a flavor more along the lines of a mango.

Kwai fruit is native to China and is eaten fresh or can be preserved with salt. The taste is described as pleasant, slightly sour, or slightly like an apricot. The texture is stringy and similar to jackfruit.

That’s it! I hope you enjoyed this post and learned something new about some fruit that starts with K. If there are any fruits we missed, or if you have a favorite one of these that isn’t on here, please comment below so other readers can know too. And don’t forget to pin this blog post for later by clicking the Pinterest button at the bottom of your screen. Thanks for reading!

Interesting Fruit That Starts with K 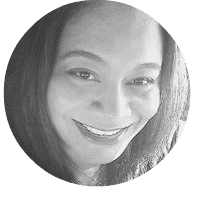 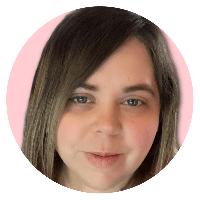